The Coptic Church is based on the teachings of Saint Mark who brought Christianity to Egypt during the reign of the Roman emperor Nero in the first century, a dozen of years after the Lord’s ascension. He was one of the four evangelists and the one who wrote the oldest canonical gospel. Christianity spread throughout Egypt within half a century of Saint Mark’s arrival in Alexandria as is clear from the New Testament writings found in Bahnasa, in Middle Egypt, which date around the year 200 A.D., and a fragment of the Gospel of Saint John, written using the Coptic language, which was found in Upper Egypt and can be dated to the first half of the second century. The Coptic Church, which is now more than nineteen centuries old, was the subject of many prophecies in the Old Testament. Isaiah the prophet, in Chapter 19, Verse 19 says “In that day there will be an altar to the LORD in the midst of the land of Egypt, and a pillar to the LORD at its border.”

Although fully integrated into the body of the modern Egyptian nation, the Copts have survived as a strong religious entity who pride themselves on their contribution to the Christian world. The Coptic church regards itself as a strong defendant of Christian faith. The Nicene Creed, which is recited in all churches throughout the world, has been authored by one of its favorite sons, Saint Athanasius, the Pope of Alexandria for 46 years, from 327 A.D. to 373 A.D. This status is well deserved, after all, Egypt was the refuge that the Holy Family sought in its flight from Judea: “When he arose, he took the young Child and His mother by night and departed for Egypt, and was there until the death of Herod, that it might be fulfilled which was spoken by the Lord through the prophet, saying, “Out of Egypt I called My Son” [Mathew 2:12-23]. 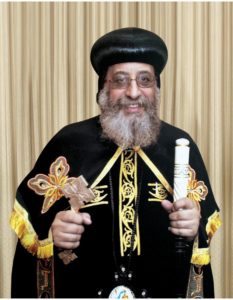 His Holiness was born on November 4, 1952 in the City of Mansoura. He graduated from the Faculty of Pharmacy at the University of Alexandria in 1975 and worked as a manager at a pharmaceutical factory in Damanhur.In 1985, he received at fellowship in world health from England and a bachelor degree in theology from the Theological College in Alexandria. He joined St. Bishoy’s monastery in 1986 where he was tonsured a monk in 1988 by the name of Theodor El-Anba Bishoy.In 1989, he was ordained a priest where he served in Damanhour from 1990 – 1997 with His Eminence Metropolitan Bakhomious of Al-Beheira. On June 15, 1997 he was ordained a General Bishop and was assigned to serve as Assistant Bishop to His Eminence Metropolitan Bakhomious.

His Holiness is an author of 12 books on Christian Theology. On November 4, 2012 (his 60th birthday) the Grace of God chose His Holiness through the Altar Ballot to be the 118th Pope of Alexandria and Patriarch of the See of St. Mark. His Holiness was enthroned on November 18, 2012. 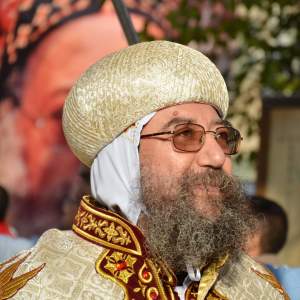 His Grace Bishop Mina was born on September 30th, 1952 in Cairo, Egypt. He was educated in Egypt. After finishing the military service, he immigrated to Yellowknife, NT, in the beginning of 1977. In 1978 he moved to Edmonton, AB, and joined the University of Alberta for a degree in Accounting. In 1980 he decided to go back to Egypt to join the Monastery of Saint Mina (Mariout, Western Desert near Alexandria) and in December of the same year he was ordained a monk by the name of Fr. Paphnotius Avva Mina.

​In 2003 he was ordained a priest. He was called to serve as a priest in Ireland where he served for five and half years and built Saint Mina’s Coptic Orthodox Church in Cahir, Munster, Ireland. He was the last bishop to be ordained by the Thrice-Blessed His Holiness Pope Shenouda III on June 6th, 2009 as a general bishop. In April 2010, he was appointed a general bishop over the churches of Old Cairo, Manyal and Fom El-Khalig in Cairo, Egypt. He was nominated by His Holiness Pope Shenouda III to become a bishop in Canada.

On March 10th, 2013 he was officially delegated by His Holiness Pope Tawadros II as the Diocesan Bishop of Mississauga, Vancouver and all the surrounding cities, towns and villages. His Grace Bishop Mina was enthroned in Mississauga, ON on Sunday, April 7th, 2013 and in Vancouver, BC on Sunday, April 13th, 2013.